The first report of the new city dates to the eighth century CE, when it is identified as Castrum Viterbii. It was fortified in 773 by the Lombard King Desiderius in his vain attempt to conquer Rome. When the popes switched to the Frankish support, Viterbo became part of the Papal States, but this status was to be highly contested by the emperors in the following centuries, until in 1095 it is known it was a free comune. 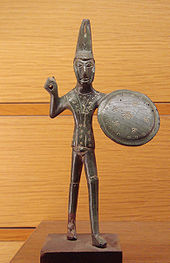 In a period in which the popes had difficulties asserting their authority over Rome, Viterbo became their favourite residence, beginning with Pope Eugene III (1145–1146) who was besieged in vain in the city walls. In 1164, Frederick Barbarossa made Viterbo the seat of his antipope Paschal III. Three years later he gave it the title of “city” and used its militias against Rome. In 1172, Viterbo started its expansion, destroying the old city of Ferento and conquering other lands. In this age it was a rich and prosperous comune, one of the most important of Central Italy, with a population of almost 60,000. 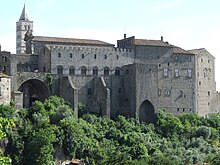 Viterbo’s historic center is one of the best preserved medieval towns of central Italy. Many of the older buildings (particularly churches) are built on top of ancient ruins, recognizable by their large stones, 50 centimeters to a side. Viterbo is unique in Italy for its concentration of ‘profferli’, external staircases that were a frequent feature of medieval houses. The San Pellegrino quarter has an abundance of them, reflecting an architectural style that is unique to the town and the nearby region.[2]

In the valley of the Arcione River just to the west of Viterbo are a number of springs celebrated for the healing qualities of their waters, and in use since Etruscan and Roman days. In fact, the imposing ruins of a great Roman bath are still to be seen and were drawn in plan and perspective by Renaissance artists including Giuliano da Sangallo, Michelangelo, and Vasari.One of the most famous were the thermal springs known as the “Bulicame”, or bubbling place, whose reputation had even reached the ears of the exiled poet Dante Aligheri. Canto 14 (lines 79–81) of Dante’s Inferno describes how:

In silence we had reached a place where flowed
a slender watercourse out of the wood—a stream
whose redness makes me shudder still.
As from the Bulicame pours a brook whose
waters are then shared by prostitutes, so did this
stream run down across the sand.

Not far from the Bulicame, whose waters were apparently always taken in the open, is the Terme dei Papi (Bath of the Popes). Almost totally concealed within the structure of a modern luxury spa hotel are the remains of a Renaissance bath palace that attracted the attention of two popes. Actually, the origins of this bathing establishment date to the Middle Ages when it was known as the Bagno della Crociata (named either after a Crusader who supposedly discovered the spring or from a corruption of the Italian word for crutch). Early 15th-century documents describe a bath building that covered three distinct thermal springs all under one roof.