Except for rare exceptions, the tombs were found in the coasts of the Calesine River valley and the tributaries Folonia and Picciolana.
The necropolis is characterized by a wide variety of types of tombs of the Etruscan era.
The Chamber tombs are the most varied typology: from the archaic age, to a single room with a short dromos, with deposition counters or single and low benches.
Of particular importance is the tomb Pisa, with irregular plan with nine consecutive chambers of which some decorated. 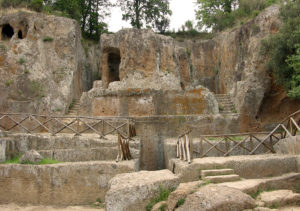 The tombs with newsstands rise to the façade above the tomb and contain various sculptural elements.
Of particular importance are the tomb of the Typhoon and the tomb of the siren or Scilla.
The temple tombs are entirely dug into the rock and reproduce the temples, significant are the two tombs Ildebranda and Pola.

The Hildebrand Tomb was discovered in 1924 by one of the Rosi brothers, and since then carefully studied in detail by Ranuccio Bianchi Bandinelli. Dating back to the III-II century. B.C. It is considered in its particularity the most important monument of the necropolis Sovana,and also of the whole Etruria. 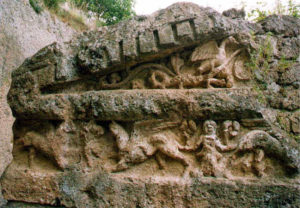 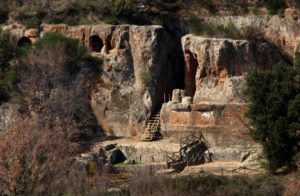