Since the 5th century BC the territory was a mining center field from the nearby Etruscan cities of Vetulonia and Roselle. With the conquest of Roselle by the Romans in the 3rd century BC the area loses importance because Roma had its own network for the supply of metals. Thus began a period of crisis in the economy of Roccastrada resulting in a population decline. The land abandonment leads the territory to paludification, which will be resolved until many centuries later. Only the hilly area maintained a certain population. 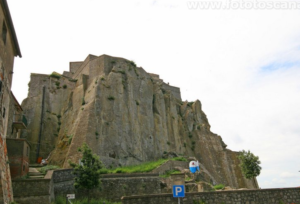 A visit to the medieval village, perched on a dramatic cliff, allows us to enter the usual plot of narrow alleys and stairways of medieval buildings. The oldest part is entered through the door of the village. Later you reach the old town square with the homonymous Tower. At his side a stairway leads us to the “acoustic”, whose name reminds us of the location of the fortress. The ancient defenses today remains only a section of the West walls, incorporated into the homes. The houses converge towards the “carceri”, old political center of the Castle. In the West there were not defensive works because it was exploited the rocky cliff.
In the village we can visit also the Church of San Niccolò (12th century)
Historic Games