The earliest evidence of Etruscans at Fufluna is from two necropolis containing material of the Villanovan culture, which was Iron Age and began about 900 BC. Except for some cities that probably began in the Proto-Villanovan, 900 is the foundation time for the majority of Etruscan urbanizations. The cemeteries are San Cerbone on the south shore of the Bay of Baratti and Piano e Poggio della Granate further north on the bay. The presence of the cemeteries can only be explained by a large settlement nearby, which can only have been Fufluna.

The acropolis of the city extended over two hills at the top of the promontory: Poggio del Castillo, and Poggio del Telegrafo. Remains of a Roman villa, Villa le Logge, share Telegrafo with an excavation last conducted in the seasons of 2003–2005, which uncovered among other things postholes from a village of huts of the same date as the Villanovan cemeteries, about 900 BC. 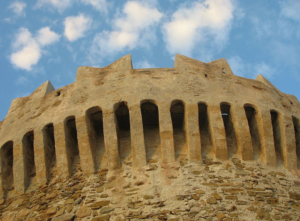 The presence of a few Proto-Villanovan tombs at Villa del Barone on another Poggio del Molino near Punta del Stellino just to the north of Baratti indicates the foundation population was proto-Etruscan. It was excavated in the 1980s by the University of Florence.

The Poggio del Molino (or Mulino, “the mill”) north of Baratti must be associated with Fufluna because of a geographical barrier, not there now, once termed Lake Rimigliano. In Etruscan times it was a lagoon fringed by a barrier island (the current beach area) extending from San Vincenzo in the north southward to the foot of Poggio del Molino, where it was broken by an egress point (today the mouth of an irrigation channel). The lake went as far inland as the mines at Campiglia Marittima, an easy route for ore barges between there and the Bay of Baratti. The lagoon eventually became a swamp, disappearing in favor of agricultural land in 1832. The lagoon and its swamps would have created conditions conducive to malaria, meaning that free Etruscans who could afford it would have preferred to live on the heights.

Around 600 BC, the city joined the confederate Etruscan League or twelve cities. It served as one of the only two port cities. 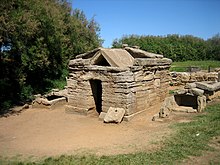