the springs of Nova creek

Located at the border between Lazio and Tuscany are embedded in a fascinating landscape of great historical interest. The area has, thanks to its abundant water resources and their inaccessibility, attracted people even in protohistory and the place was inhabited since the late Bronze Age as evidenced by the remains of settlements on the plateau between two inflows of the Nova creek. The settlement was inhabited with interruptions up to the Middle Ages when it was abandoned definitively (there are no evidences of Etruscan or Roman period).

The site is a tipical, naturally defended hill settlement, and is placed on a plateau between two confluent creeks (the Varlenza and the Porcareccia). In the vicinity there is the spring of the Nova (the name giver of this area) that has an average flow rate of 120 liters per second. On this promontory, along artificial terraces, we can find evidences of a proto–urban center attributed to the Final Bronze Age (XII–X century BC.) and the rests of a medieval settlement, corresponding to the Castle and village of Castiglione, which belonged first to the Aldobrandeschi family and after to the Farnese.

The Villanovians, according to many archaeologists ancestors of the Etruscans, had here one of their main settlements, with about 1500 inhabitants: a true metropolis, for the time. Discovered about 30 years ago by Dr. Nuccia Negroni, an archaeologist at the University of Milan, the protohistoric site of the Nova preserves numerous archaeologic remains in particular grottos and the bases of dry stone walls of huts.
At the eastern end of the plateau, we can find, however, a unique monument, which archaeologists havedefined,  the “holy stairs”. On a large boulder, in fact, appear carved steps leading to the summit; from there, you can enjoy a wide and spacious panorama. Giovanni Feo (“Mysteries Etruscans“, by Stampa Alternativa) argues Feo claims that this boulder constitutes a special holy place, from where they could get into connection with the nearby shrine of “Mount Becco”, whose temple, according to tradition, was probably dedicated to the goddess Volturna (Voltumna), the most important Etruscan female divinity. 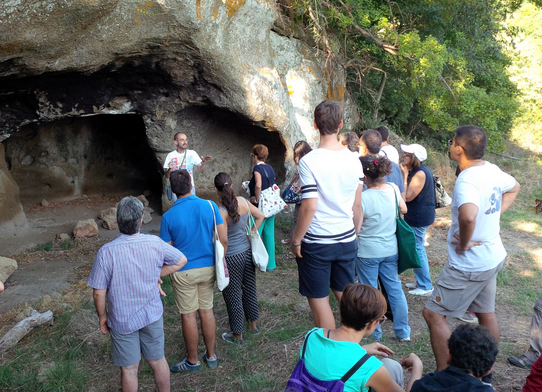 In the Middle Ages the name of the place appears for the first time in 1210 in the fiefs certificate granted by Emperor Otto IV to Ildebrandino Ildebrandeschi. The Certificate lists the castles and lands belonging to the fief: Pitigliano, Sorano, Vitozza, Sala, Ischia, Farnese, Petrella, Morrano, Castellarso, Latera, Iuliano, Mezzano and in fact Castiglione near by “Le sorgenti della Nova”.
In the 19th century, the area around the Nova springs and the near by Lamone Forest became a popular “summer residence” of the most famous brigand of the Maremma: Domenichino Tiburzi. This is why he got the nickname “Re del Lamone” (King of the Lamone forest).

The place is just beautiful and offers wonderful panoramic views over the countryside and is perfect for a hike. The entire trail takes about an hour. Of course it’s worth visiting the the remains of the Villanova settlement with its wells, grottos and foundation wall remains of huts. The rock overlooks the gorge of the Nova creek and beyond you can see the ruins of another settlement, Castel Iuliano.
The spring of the Nora (that gave its name to the entire area) can be accessed from the beginning of the path you used to reach the plateau: just exceeded the gate, we can find a passage on the right that leads to a group of trees at whose feet, from a cave, gushes, limpid and pure, water.