The lake of the middle is a small lake of central Italy, of volcanic origin, formed about 400,000 years ago.
The lake has a round form, typical for its origin, and possesses an emissary river, the River Olpeta, in turn the tributary of the Fiora. It has a total area of 47.50 ha, a perimeter of 2,516 m, and is located at 452 m A.S.L.
The lake is located in the territory of the Municipality of Valentano (VT), although the nearest centre is that of Latera, whose municipal territory is located a short distance away.
The campaign of the Superintendence for the archaeological heritage of southern Etruria has had a vast echo for the quantity of artifacts that have come to light. Many of these are preserved in the Museum of the Prehistory of Tuscia and the Rocca Farnese in Valentano.
In 2005 the lake of the half-life was proposed as a site of community interest. 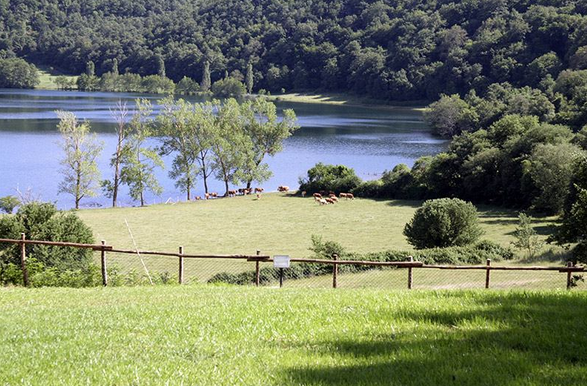