The game is the heir of an ancient tradition handed down in the generations that seems to go back historically to games practiced by the ancient Romans, borrowed from the Greeks.
The first versions were played with bare hands, but starting from the sixteenth century began to use a racket to protect their hands, especially in the aristocracy. Probably it was for this reason that the game with the racket remained over the centuries the prerogative of the city, while the barefoot one remained in the rural areas. It should be noted, in this regard, that in the area of ​​Ciciano and the metalliferous hills, the game seems to have remained in its most ancient version.

The current game
In the municipalities and in the Tuscan hamlets where the game is practiced, there is no dedicated “playing field”, so the game is traditionally practiced in the streets or in the squares, just as it happens in Piedmont with the pantalera. Each country has a characteristic playing field, with varying morphology and slope depending on the country. During the spring and summer in each of the countries a tournament takes place, in the absence of an official regulated championship. 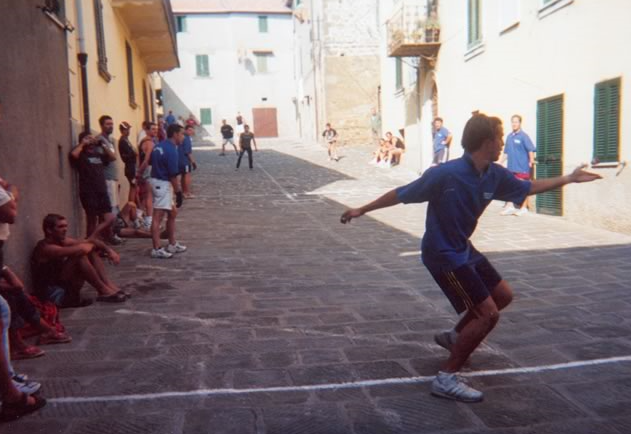