Maremma In the eighteenth century was dominated by pirates, malaria and an atmosphere of silence and death,so, ” San Paolo della croce” wanted to launch a “challenge” by building a convent which would have been, over time, a sign of civilization and spirituality.It was the Saint to drawe the initial structure (a rectangle) of the church, devoted to poverty and austerity, as he wanted his rule that, the church did not want “precious ornament of raising majesty and decency to the divine worship. “ 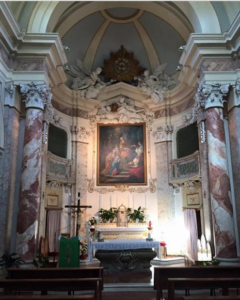 The core of the church, thanks to the recent renovation, is now quite recognizable and usable. Even the church was returned to the homogeneity that was given, in 1780/82, by the “master builder” Michele Rusconi.

It is worthwhile to admire the beautiful view from the top.