At the centre of a fascinating territory abounding in natural springs, where geothermal sources have been traditionally exploited, the exceptional Sasso Pisano complex constitutes the only surviving example of Etruscan baths from the late Hellenic Age.

Dating from still more ancient times (III century B.C.) are the remains of a quadrangular “portico” of the Doric order consisting of great squared blocks of local limestone, to which were added, in the II century B.C, two thermal installations with pools and service facilities, covered by tiled roofs. These structures were flanked by numerous quadrangular rooms, probably used to receive visitors and pilgrims.

The complex hydraulic system, designed to exploit the nearby warm-water springs, is extremely interesting. Limestone channels conveyed the water to the pools used for bathing and to the great outdoor fountain on one side of the portico….read more. 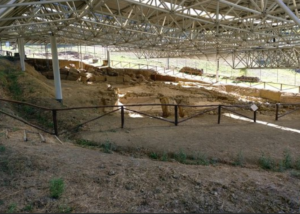