From the historical and economic point of view, the river Farma, represented a line of union between the world of mines, the forest, the Siderugia, the trade of metals and crafts. In fact, along the Farma River, thanks to the abundance of water and timber, there were numerous medieval ironworks, some of which are still recognizable remains.
In the Ferrers, through the process called “low-Fire”, the Ferrifero ore was merged from the Metallifere Hills, the island of Elba and some modest local deposits of hematite (iron oxide), there was produced the so-called “sponge of Ferro “, that is, a semi-finished product that was then marketed, even in distant sites where, in the blacksmith’s workshops, it was recast and worked to transform it into a finished products.
The name “gullies” is probably due to the presence of numerous deep engravings produced in millions of years by the erosion of water on the harsh quartz rocks that emerge here.

The suggestion of the place is remarkable, we are suddenly faced with huge grey rocks, tormented by erosion and traveled by waterfalls that during the floods become avalanches of water, arrived in this place we are facing only rocks and water, water and Rocks.

Observing with attention it is seen how the water eroded the metamorphic rocks of the geological formation called “Poggio al Carpio” of Permo-Triassic age (about 250-200m. A.), in the grey rocks it is possible to see the rounded fragments of quartz Which are mainly made up, they are recognizable by the milky white color and, sometimes, violet, their size varies from a few millimeters up to a few centimeters in diameter.
In some rocks along the riverbed one can observe a particular erosive phenomenon, due to the action of water vortexes that drag with itself of the fragments of rock, the swirling movements, for abrasion, have produced on the rocks of the suggestive concave shapes Circulars called “giant mufflers” because of their similarity to big blocks. 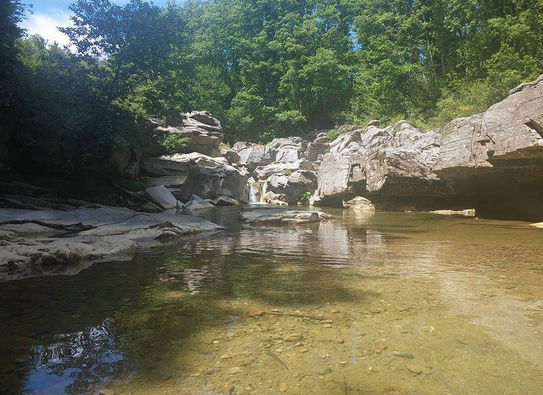