The site of  Buca dei Pipistrelli was singled out in the first half of the years ‘ 60 of the last century by Prof. Alfio Gianninoni, member of the Maremmano Speleological Group, who,together with Prof. Vincenzo Guerrini, president of the same association,picked up some elements of the lytic industry (typologically ascribable to the middle and Upper Palaeolithic), few ceramic fragments, a fair amount of faunal remains (mostly of the Pleistocene epoch) and Some human findings, including a left parietal bone and a large portion of frontal bone, attributed to the Bronze Age. 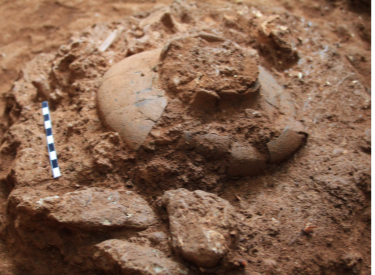 Currently the territory in which it is inserted pit of bats is becoming very rich in testimonies of prehistoric age: in an area of a few square kilometers have been recently identified two important Paleolithic sites.

The excavation activity was carried out thanks to the financial contribution of the civic office of Montorsaio which also provided hospitality for all participants in the work.